Last week my long time friend welcomed a new little guy into the world. In January I hosted a Rustic Deer baby shower for her. When she found out she was having a boy we started discussing nursery themes and ideas. 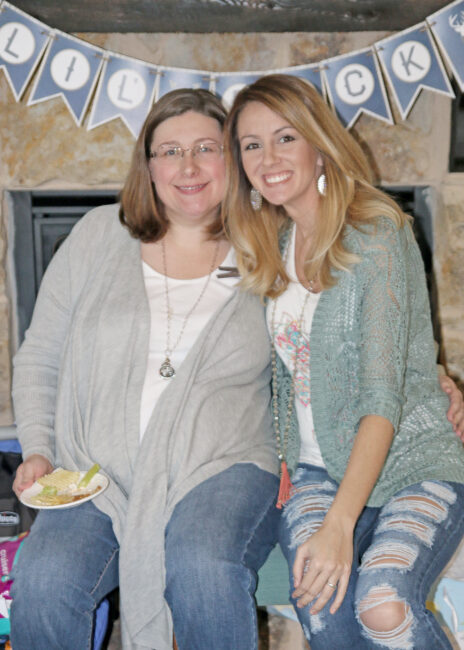 She decided to go with a Rustic nursery theme. When I started looking at ideas I knew for sure I wanted to make things that I could use as the shower decor but also things she could use in her new baby boy’s nursery. I have a hard time buying a bunch of party decor that gets thrown away! So I decided to throw her a Rustic Baby Shower Theme since that’s the theme she was using in his nursery.

She sent me a picture of her nursery inspiration and after some google image searches, I found the original source here. 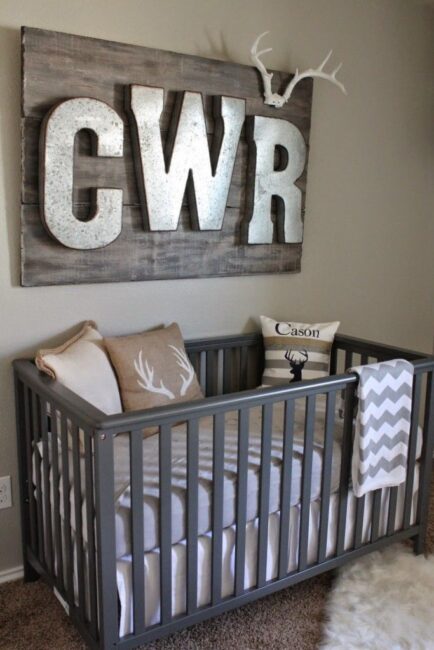 She ended up choosing this bedding that had tan, brown, gray, and navy in it. 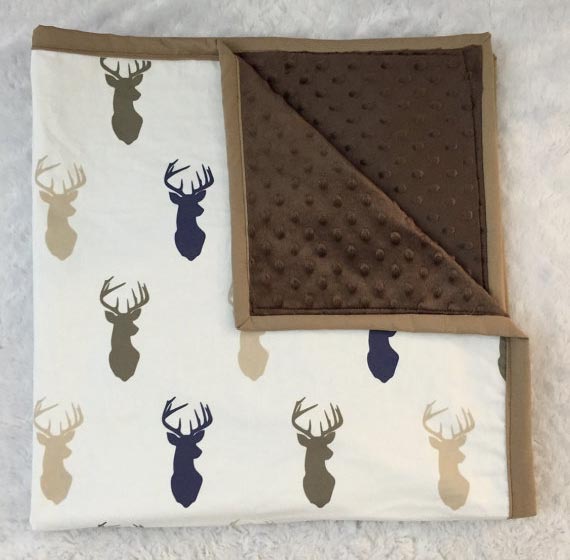 I also forced her and her husband to pick a name so I could buy the letters to make a monogrammed back drop similar to the one pictured above the crib! No pressure or anything, he only has to have the name you pick for the rest of his life. Ha!

For the Shower, I created several printable Rustic Baby Shower Theme items that are now in my Etsy Shop. Here are the invitations that I made for her.  I am a sucker for little boys and bow-ties. I used the same bow-tie on the deer that I put on Tate’s Little Man Theme First Birthday. 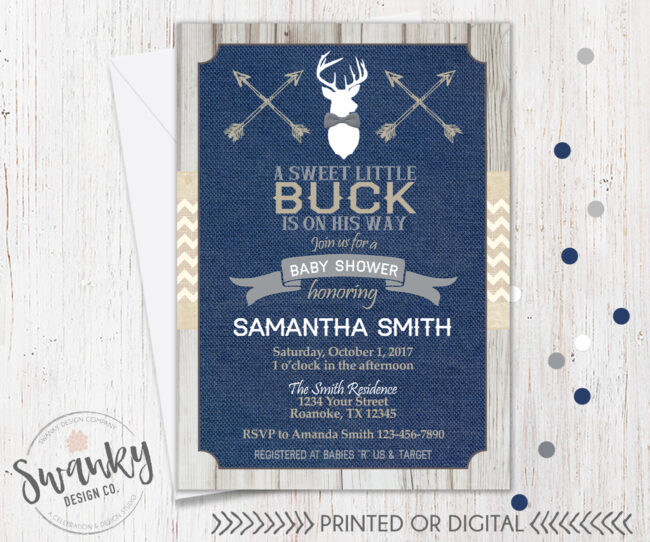 I also made diaper raffle tickets. I sent these out with the invites because we all know you can never have enough diaper! Right? 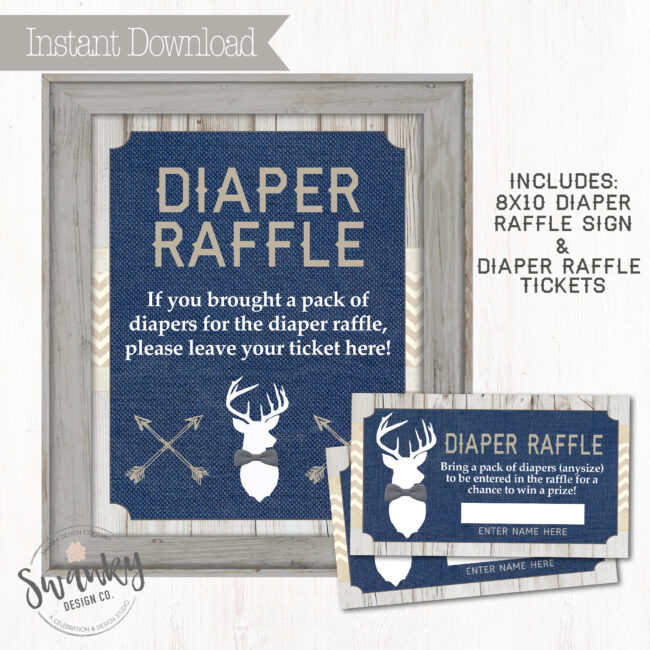 And matching Books for the little buck inserts to build babies library! 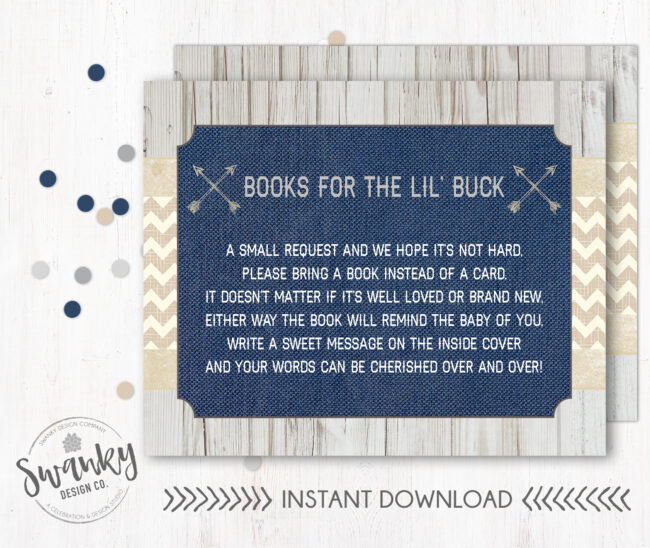 And you know me! I love banners so I made this Lil’ Buck Banner. I am also sharing this as a free download here. 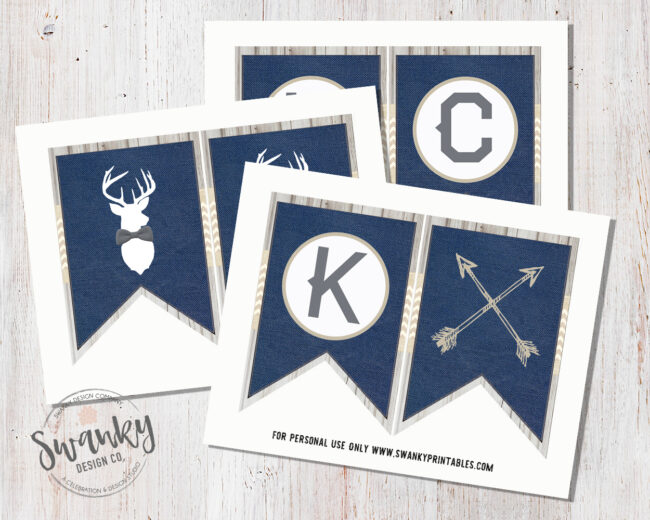 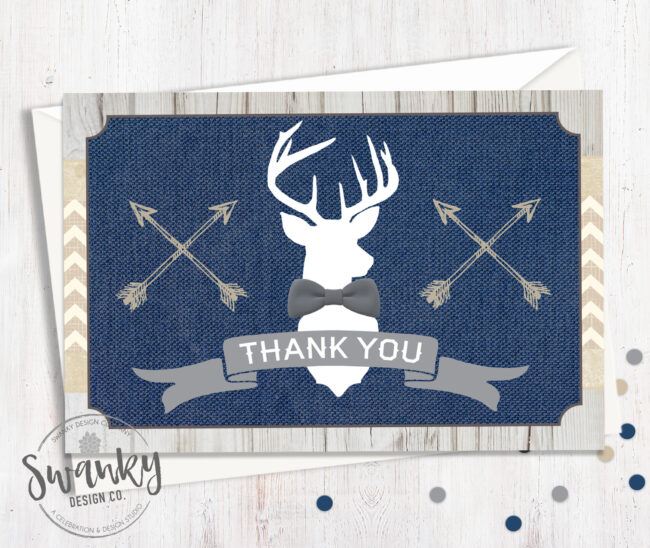 Sign up to be the first to know when new printables are released!

This error message is only visible to WordPress admins

Please go to the Instagram Feed settings page to create a feed.

We use cookies on our website to give you the most relevant experience by remembering your preferences and repeat visits. By clicking “Accept”, you consent to the use of ALL the cookies.
Do not sell my personal information.
Cookie SettingsAccept
Manage consent

This website uses cookies to improve your experience while you navigate through the website. Out of these, the cookies that are categorized as necessary are stored on your browser as they are essential for the working of basic functionalities of the website. We also use third-party cookies that help us analyze and understand how you use this website. These cookies will be stored in your browser only with your consent. You also have the option to opt-out of these cookies. But opting out of some of these cookies may affect your browsing experience.
Necessary Always Enabled
Necessary cookies are absolutely essential for the website to function properly. These cookies ensure basic functionalities and security features of the website, anonymously.
Functional
Functional cookies help to perform certain functionalities like sharing the content of the website on social media platforms, collect feedbacks, and other third-party features.
Performance
Performance cookies are used to understand and analyze the key performance indexes of the website which helps in delivering a better user experience for the visitors.
Analytics
Analytical cookies are used to understand how visitors interact with the website. These cookies help provide information on metrics the number of visitors, bounce rate, traffic source, etc.
Advertisement
Advertisement cookies are used to provide visitors with relevant ads and marketing campaigns. These cookies track visitors across websites and collect information to provide customized ads.
Others
Other uncategorized cookies are those that are being analyzed and have not been classified into a category as yet.
SAVE & ACCEPT